Bitmap 2 includes waveshaping, wavefolding, and wave windowing for harsh digital distortion.  Buchla synthesizers used waveshaping and wavefolding to generate complex waveforms, and the waveshaper module of Digidesign's Turbosynth program (1988) could twist and mangle samples.  We are currently working on major update to the Bitmap 2 Owner's Manual that will go into detail, but here is some preliminary information.

The ⚠ modulation settings add additional waveshaping distortion that get more extreme as the DEPTH is increased. They are level-dependent, so you need to adjust the DRIVE and DEPTH knobs to get different effects. The signal flow is DRIVE —> WAVESHAPE —> CRUSH, so the DRIVE control can saturate the input signal before waveshaping and the CRUSH control sets resolution of the waveshaping. They generally work best on simpler waveforms, and rolling back the FILTER cutoff can tame some of the harshness when desired.

The waveshaping example that people are most familiar with is probably early Nine Inch Nails, where Trent Reznor used TurboSynth to mangle sampled guitar tracks.

Here’s the input signal I’m using. I used the DRIVE control to scale it so that 7/8 LEDs are lit and it is using the full signal range of the Bitmap:

Increasing the DRIVE control will clip the peaks of the triangle: 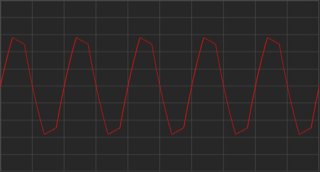 Wavefolding - also called foldover distortion - folds the peaks of the waveform down, creating new harmonics. At extreme settings, it will fold the signal multiple times. With DEPTH at 7:00, it does not distort the signal. Increasing DEPTH to 9:00, the peaks of the triangle wave get folded down: 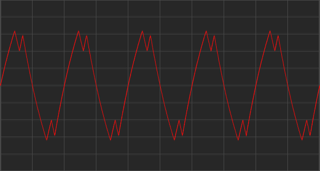 With DEPTH at 12:00, the peaks fold down to the x-axis and then start folding back up: 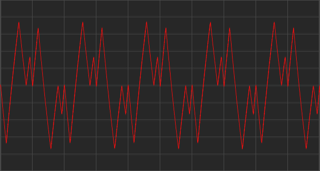 And with DEPTH all the way up, it folds multiple times: 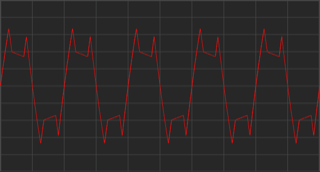 If we turn the DRIVE down instead, the signal will be quieter and the peaks will stay below the folding point, so it will stay clean. These effects are very amplitude dependent.

The CRUSH control comes after the wavefolder, so it can be used to quantize the distorted waveform. Here DRIVE is turned back down and DEPTH is at 12:00. Setting CRUSH to 3:00 will quantize the folded signal to a few levels: 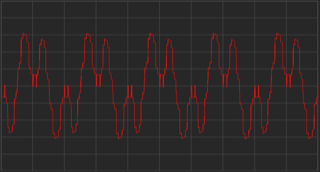 The DRIVE and CRUSH have similar effects on the wave comparator and waveshaper.

A Window comparator (wave windowing) lets waveform peaks pass, but zeros out the signal around the x-axis (zero crossings). The drawings below are approximate, but show how the DEPTH control increases the flattened part of the curve. 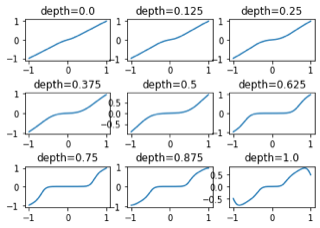 At the minimum DEPTH, it adds a little distortion to the zero crossings: 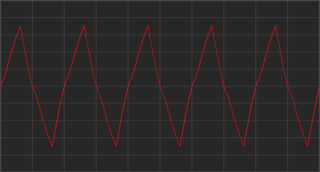 As the DEPTH is increased, the flat part around the zero crossings gets larger and the waveform gets spikey: 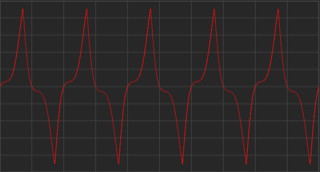 Waveshaping uses a polynomial to introduce new harmonics. At lower settings it gives a nice saturation, and at higher settings it folds the signal multiple times. It is smoother than the wavefolder.

The drawings below are approximate, but show how the DEPTH control changes it from a soft saturation curve to harder clipping (0.25), and then adds multiple folds. 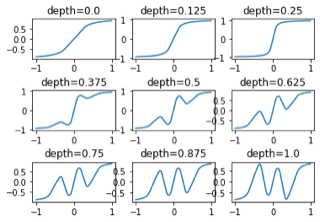 At minimum DEPTH, it gives you soft saturation: 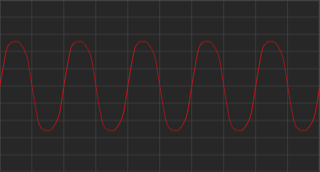 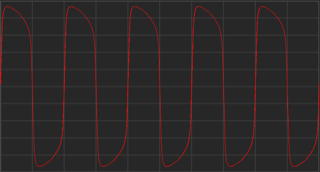 and then folds the signal over. Here the DEPTH is at 3:00: 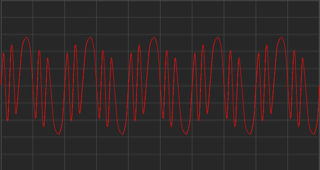 but if we turn down the DRIVE, we stay in the middle part of the curve and the distortion is less drastic: 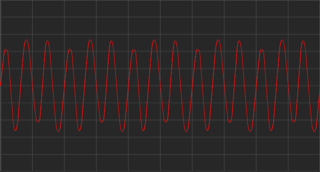