In January, 2011, I had a working Particle prototype that did freeze, stutter, random, reverse, and pitch shifted delays - most of the effects now associated with granular delay pedals. I initially described it to people as a granular delay / pitch shifting pedal, but soon shortened that to “granular delay.”

(Have you already read part one?  If not, that's here.)

Progress on the Particle was slow that winter, because my job was intense. At least 30 hours of meetings, working on four different development teams for three different projects, and lots of overtime. I would often leave the office mid-meeting, switching to my cell phone to meet my daughter up at the bus stop, then log back on when I got home. Staring at computer screens 16 hours a day was one reason I had stopped working on software synths in 2009 and started building pedals. Drilling enclosures and soldering PCBs would be an escape from Webex, PowerPoint, and writing enterprise PLM software.

In February, 2011, I ordered 50 FV-1 chips to build the first batch of Particles. The parts sat for two months, because I was too busy at work to build pedals. The most extreme case was a demo at a user conference in Las Vegas. Our team had been working 12-16 hour days for weeks. I worked around the clock at the hotel, getting three hours of sleep and not stepping outside the hotel for four days. On the last day, I sat backstage (literally behind a curtain) keeping a server running, while my boss sat in the front row refreshing an iPad so the app would not crash. She handed it onstage right on time for the presenter to run through the demo. We pulled it off, but it was pretty clear that I would have to quit or get a different job in order to make any progress on the Particle.

It was the end of July before I had time to build 5 Particles for beta testing.

The first batch of Particles used a Lexan label, which is a tough, chemical-resistant laminated label often used for industrial control panels. Some people complained that it looked like a cheap sticker, so I switched to screen printing after the second batch. Screen printing was cheaper than the Lexan labels, and less durable, but what people were more familiar with. 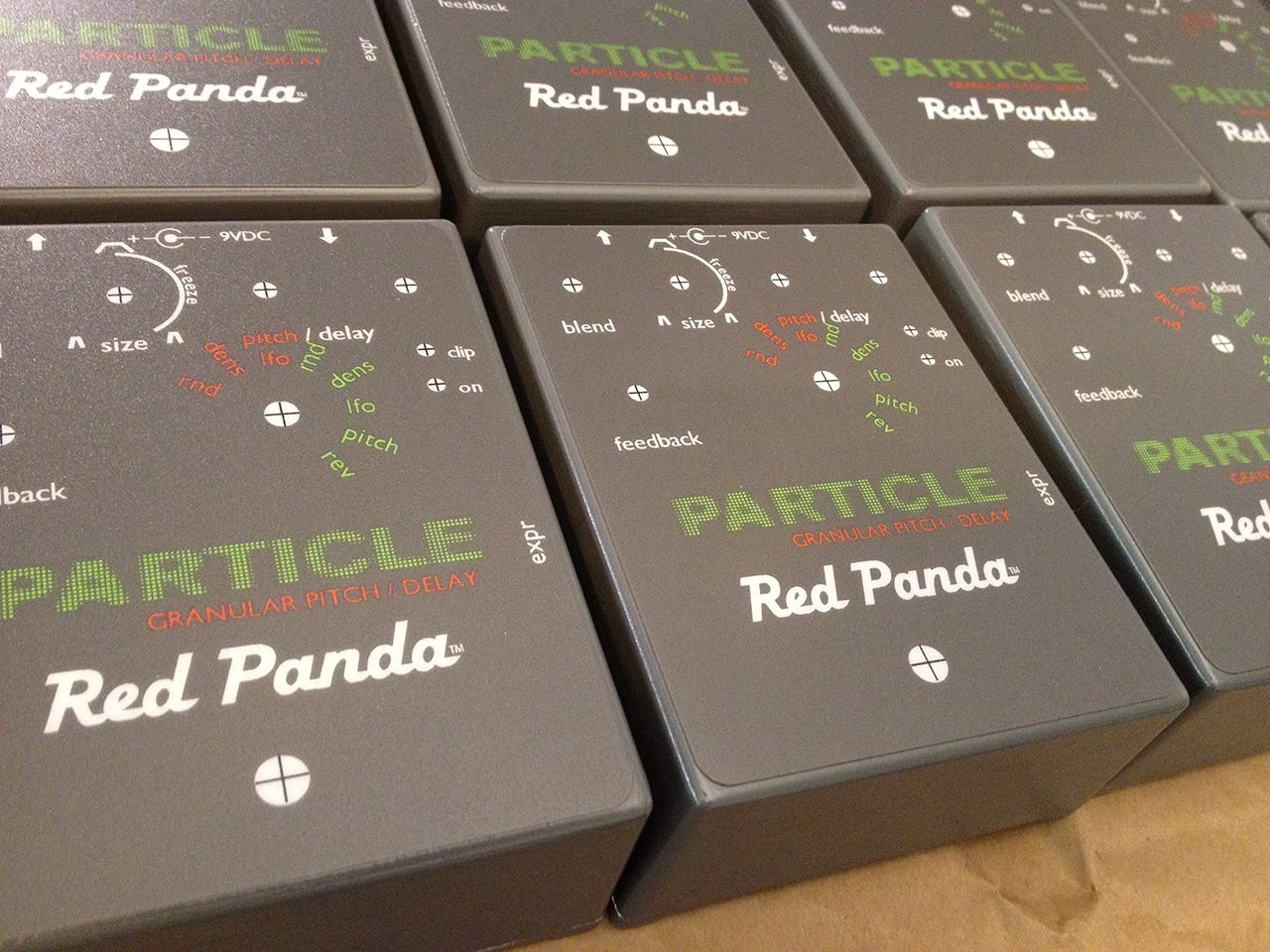 In October, 2011, I painted the first 13 enclosures using automotive spray paint on my driveway. The Lexan labels had hole locations, which I hit with a spring-loaded center punch and drilled with a hand drill. For the second batch, I upgraded to a Craftsman benchtop drill press, transfer punches, and a laser cut acrylic jig.

I set up my soldering iron and fume extractor on a folding table in our spare bedroom. The cardboard trays are from Costco dog food packaging. The Panavise and the dryer vent hose duct taped to my fume extractor were the only new purchases. The soldering iron is my old dependable Weller WES51. We used it for a few more years before upgrading to the Metcal MX-500s that we use today.

On November 28, 2011, I added the Particle to the web site. It was available for sale 19 months after I started designing it.

I built another batch of five Particles in December, 2011, and made a couple of internal changes to make it easier to build.

At my job, I was transferred to a different group, away from my great boss and the people I had enjoyed working with for years. The first quarter of 2012 I was working 70 hours per week at my job and too busy to do any pedal building. I made a few tweaks to the Particle algorithms and ordered circuit boards and parts for the second batch of Particles, but they sat on my workbench for months. On April 2, 2012, I gave four weeks notice. 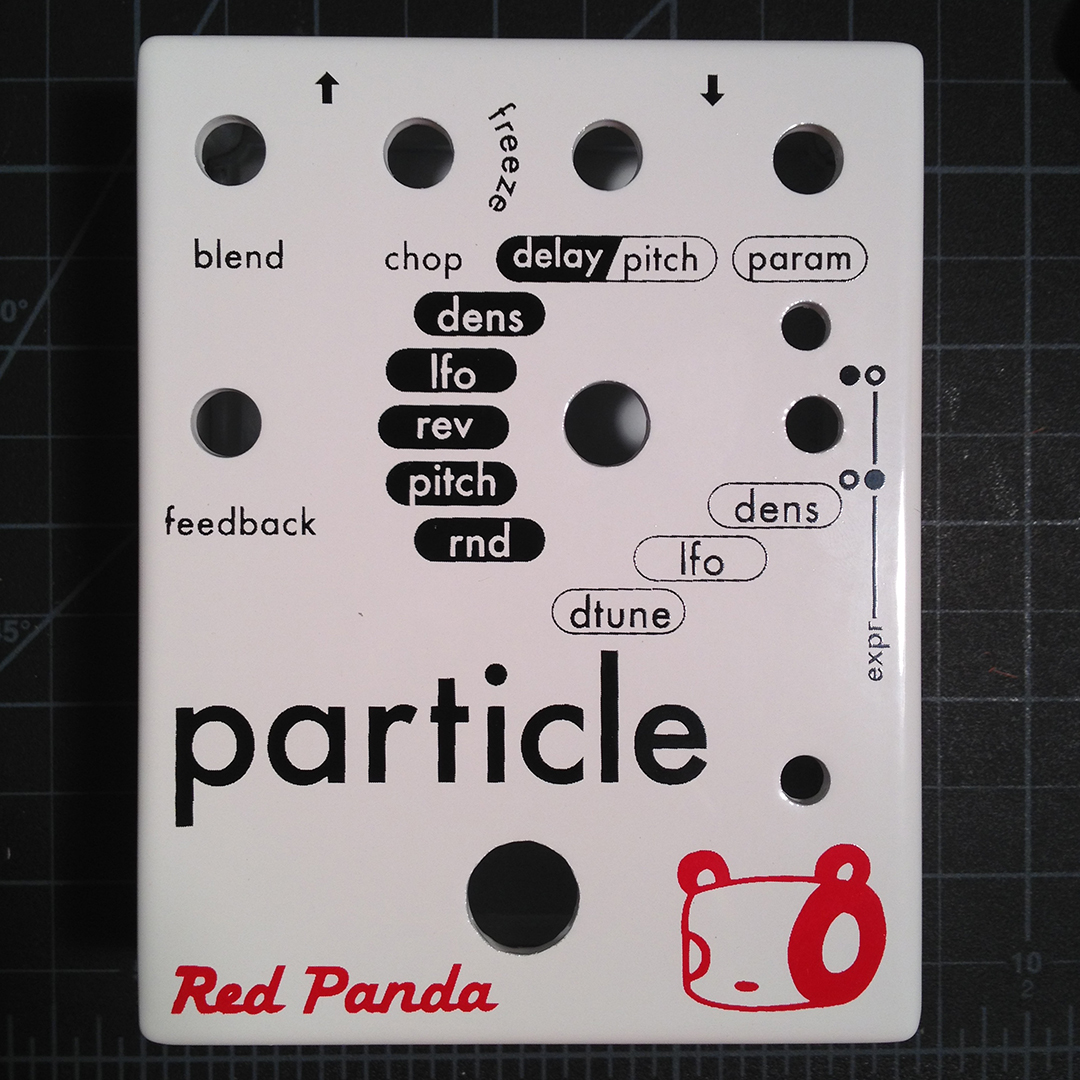 The first couple weeks after leaving my job were spent looking at knobs and redesigning the Particle enclosure. I wanted a minimal design on white. White enclosures were rare - conventional wisdom is that they get too dirty - but I thought it would age in an interesting way after use. Eric Iverson designed the graphics, with the panda head, “pill” labels, and lowercase Futura. 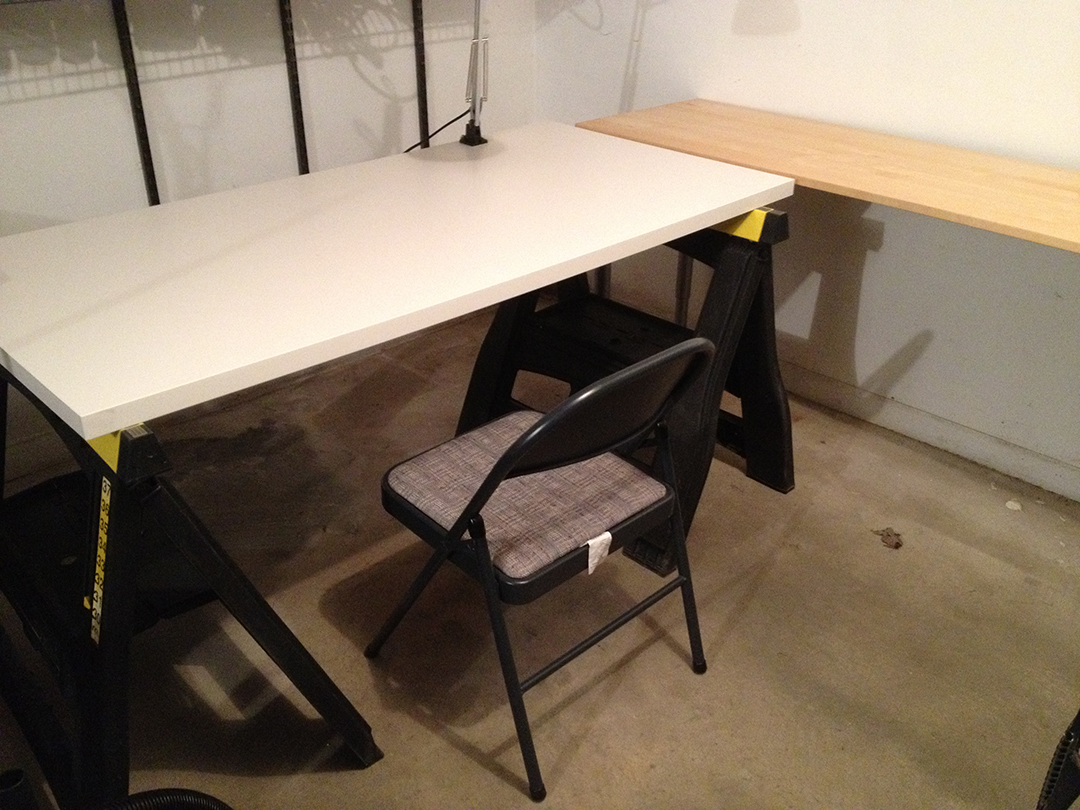 A month after quitting my job, most of the parts had arrived for the next batch of Particles. I bought a $14 table top from IKEA’s as-is section and put it on two sawhorses in my garage. I soldered the circuit boards, but the enclosures were delayed. The enclosures finally arrived in July and I started building preorders, three months after I quit my job. The delay was nerve-wracking, but allowed me to design and prototype the Context and Bitmap before I got busy with production and day-to-day operations. July 20, 2012 I sent invoices for the first two white Particles. 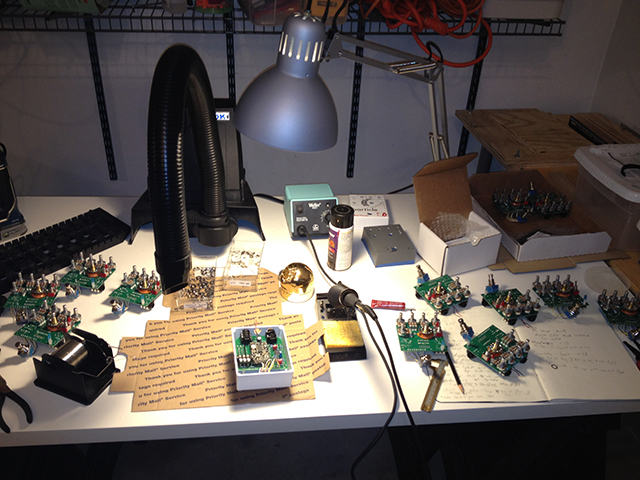 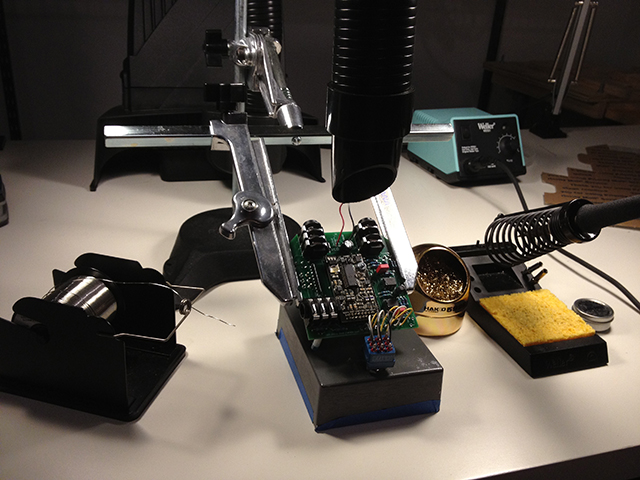 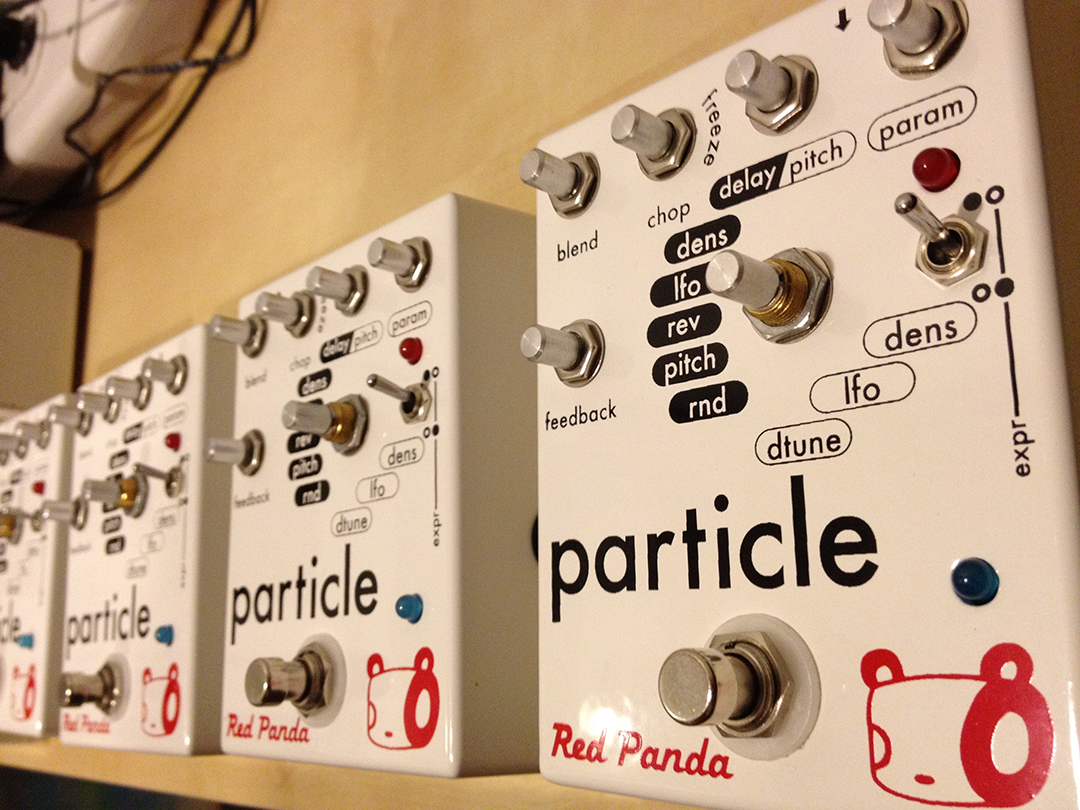 In October, 2012, I shipped my first two wholesale orders - to LEP International in Japan and EffektBoutique in Germany. I was working 80 hours a week, but now it was doing something I loved. Going into the end of 2012, I was building Contexts and Particles, with a wait list building up. I updated the Particle PCB to switch from through hole to surface mount components for efficiency. At the time it was still common opinion that “through hole sounds better,” but electrons do not care.

I was still soldering all of the components myself, initially with a soldering iron. Once I mastered SMT soldering (down to 0805), I switched to toaster reflow. 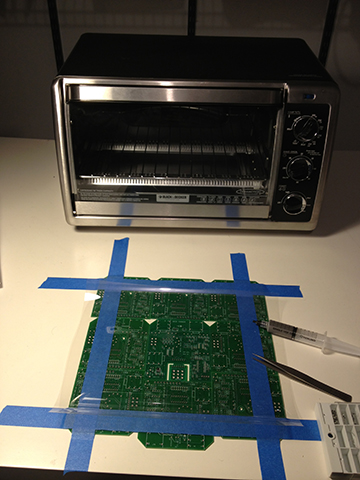 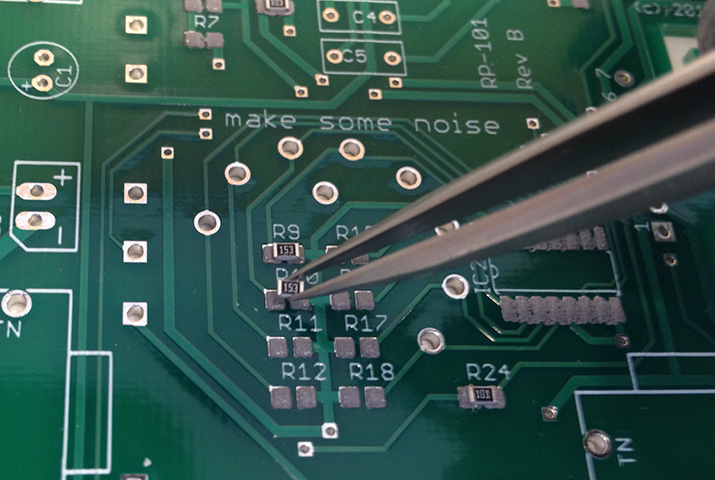 In December, 2012, I was using tweezers to place SMD components and a Black & Decker toaster oven for reflow. With reflow soldering you ramp the temperature over time following a profile (kind of like the programmed workouts on an exercise bike). You can hack the toaster oven with a microcontroller and thermocouple to do that, but I just used the UltraTimer app on my iPhone to tell me when to adjust the oven’s temperature knob while I was putting components on the next board.

It saved about one hour per board. An added bonus was that it kept me warm in the unheated (but insulated) garage. Very DIY, but pedals from that toaster have gone around the world on tours and were used on albums that you have heard.